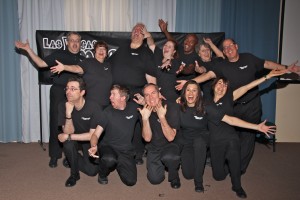 The Las Vegas Improvisation Players celebrates its 16 years of offering up “clean-burning” improvised comedy shows to the greater Las Vegas community with a anniversary show on Saturday, February 18. The show will be held at the Henderson Convention, located at 200 S. Water Street in Henderson. Show begins at 7:00pm and tickets are only $10. Ticket purchase is available at the door which opens at 6:40 p.m.

As one of the area’s longest running improv troupes, the Las Vegas Improvisation Players have provided quick-witted, spur-of-the-moment comedy to thousands of Las Vegas valley residents over the years. Inspired by suggestions from the audience, the troupe creates on the spot hilarious new scenes, songs and poems in a format similar to the popular TV program “Whose Line is it Anyway?”  Keeping the comedy swift, fun and clean, these shows provide an enjoyable and suitable evening for the whole family.